I went from being a stay-at-home mom who couldn’t handle a gun to becoming an NRA instructor who actively helps women move from fear and apprehension about firearms to feeling safe, comfortable, and confident. 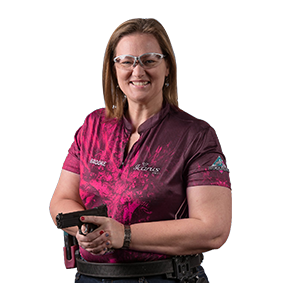 So how did I go from clueless to confident around firearms?

I grew up around guns. My father always had them around. But I never really knew anything about them.

The few times my dad took me to the range, he would hand me a loaded gun, I would shoot some targets, and then I’d hand the gun back to him.

I never learned how to load or unload a gun.

When I met my husband in college, he had a pistol permit, so I decided to get one too. But we rarely went shooting. And when we did, it was pretty much the same thing: he would hand me a gun, I would shoot it, and then I would hand it back to him.

In 2007, we moved and my pistol permit expired. I let so much time go by that I needed to take the class all over again before I could renew it.

I was excited, though, because this was going to be my first real class. I couldn’t wait! When I got there, I had such high hopes that I would learn everything I needed to know about guns this time around.

8 hours later I left feeling disappointed and thinking, "that was it?"

I passed the class, I shot my targets, but I didn’t really feel any more confident about guns than before.

In 2008, I found myself home with two small children and a growing fear of the “monsters in the closet”. I knew the statistics about accidental gun shootings in the home. I knew the number of people who harm themselves with their own firearms.

I didn’t want to become one of them.

Not me. Not my children.

I wanted (and needed) more training. I started searching for some kind of basic pistol course in the area. All I could find were full weekend or full week classes that I would need to travel to and that would cost me hundreds of dollars.

To make matters worse, I barely understood the course descriptions, and I wasn’t sure if I even met the basic skills required to attend.

Plus, with two small children at home, there were very few training courses that I even had the time to attend!

But I persisted. I needed to conquer my fears and overcome my cluelessness about guns. The safety of my home depended on it.

I still remember the first time I packed my own bag and headed to the range.

I was so excited and confident!

In time, not only did I learn how to safely handle a firearm but I also discovered a passion for competitive shooting. I was able to turn fear into fun!

I have continued to study and train ever since.

• Certified Refuse to Be a Victim Instructor

When I became a certified NRA instructor in 2011, I never intended to teach anyone. However, the more I learned, the more I wanted to share the feeling of confidence I had gained with everyone else who wanted to learn.

So in January 2014 I opened A Great Start Shooting School. I geared my classes toward women who were either fearful of or curious about guns and ready to learn more, just as I had been.

Today, I teach both women and men a wide array of courses, from pistol permit classes to finding your perfect gun to action shooting and more.

But most importantly, I offer those classes the way I needed them when I got started:

One-on-one training for beginners in a relaxed environment with a patient instructor.
Simple classes with short time spans (I teach on an hourly basis) for busy moms who can only carve so much time out of their day.
A focus on comfort, familiarity, and education.

One of the best things about training with me is that if I don’t know the answer you are looking for, I probably know someone who does. The mission of A Great Start Shooting School is in the name: we’re here to give you “a great start” to build your confidence and open the possibilities to you.

Do you worry about the guns in your house as I did?

Have you struggled to know where to start or what to even look for when it comes to firearms instructor training?

Do you struggle to find the time to take a course or spend the money required to learn about firearms?

I’ve been there. But if you are ready to turn your firearm fears into fun, I am here to help you go from clueless to confident by teaching you in a relaxed one-on-one environment.

View All Our Firearms Training Classes

My journey from clueless to confident also led me to discover a new passion as an advocate for  issues such as mental health, suicide and violence prevention, firearm legislation, and gun safety.

In October of 2018, I started Suicide Prevention Saturday on Facebook to increase awareness and understanding about suicide and how to recognize and prevent it.

Over 60% of all gun violence in the United States is attributed to death by suicide! As a gun owner and instructor, I am passionate about preventing this tragedy.

It is also a very personal cause.

I was suicidal as a teen due to challenges I faced growing up. Eventually, I realized I didn’t have to deal with it on my own.

Today, I share the lessons I learned on A Great Start Shooting School’s Facebook page each week , often bringing in special guests for interviews.

A Great Start Shooting School puts its money where its mouth is. 10% of revenue goes toward the following charities:

For each $20 donation, one  pound of plastic is removed from the ocean. 4Oceans was founded on the belief that business can be a force for good and that the single actions of individual people, collectively, have the power to change the world. I have been donating to the cause by buying from their shop. Check it out and see how you can help too

Feeding America is a resource to find and fund local food banks. The Feeding America network is the nation’s largest domestic hunger-relief organization. Check them out in your area. Help grow their network if your local food bank isn't listed. Help make it easier for folks to find food when they need it. With the support of businesses and the government, we can end hunger.

The Doe Fund's mission is to break the cycles of poverty, homelessness, and recidivism through economic opportunity, housing, and comprehensive supportive services in NYC. I have been to the headquarters and LOVE the way they started and what they have grown into. I support them with monetary donations, and when in NYC, thank the "Men in Blue" for their hard work. We need more charities like this to help men and break bad cycles and put fathers back in homes.

Aiming for Zero is a subsidiary of Active Heroes and provides the national competitive shooting community a channel through which to focus their efforts to support ending veteran suicide. I volunteer to help with the competitions as well as make donations to the cause. You may be surprised to find that 66% of the "Gun violence" that you hear about is suicide. Sadly, a large percentage of that number are veterans. WE can do better. Check out the website and see how you can help.

Operation Underground Railroad is a nonprofit organization that works with law enforcement to orchestrate sting operations to take down sex traffickers and rescue the innocent. Last year O.U.R. made 800 rescues and 800 arrests, but I would like to help them exceed this number in 2022. Feel free to join me and donate to Operation Underground Railroad as well to put an end to sex trafficking.

The DC Project is a group that hopes to raise awareness that gun rights are women’s rights. They also promote firearms safety through education not legislation. Brooke joined the DC Project in 2016 and has served as the Connecticut State leader since 2019, donating both her time and money to the cause.

In her role, she frequently goes to Washington D.C. to testify as a voice of preservation for America’s gun culture and helps to highlight the diversity of female gun owners through ongoing advocacy. Please feel free to join us, no matter what state you live in.

The town of Harwinton is proactive in considering ways to preserve and protect prime agricultural parcels and forestland through grants and preservation programs.

Brooke has been a member of the National Shooting Sports Foundation since 2015, a national organization that advocates for the firearm industry and works to keep guns out of the wrong hands while promoting their safe, responsible, and legal use.

The NSSF seeks to educate the public about gun safety and the industry’s lawful products, advocates for the firearm and ammunition industry, and works to find real solutions to help create safer communities.

Harwinton, CT Zoning Board of Appeals

Brooke ran for public office in her hometown of Harwinton, Connecticut and was elected to the Zoning Board of Appeals for two terms.

The Zoning Board of Appeals holds public hearings to apply the zoning bylaws, ordinances, and regulations of the town of Harwinton and seeks to maintain the general purpose and intent of these laws in relation to public health, safety, welfare, and property values.

Brooke is active in her local CCDL, a grassroots organization dedicated to protecting the right to keep and bear arms and helping the citizens of Connecticut to understand the laws being put forth regarding firearms.

Brook has been an active Member since 2013, donating her time, speaking at their rally, recruiting, and making financial donations. If you are not in CT find your state 2A group and support them as you can.

Brooke became active in her Republican Town Committee (RTC) in 2012 and became the RTC chair for several years. She stepped down in 2019 but continues to participate on the committee.

Save Thousands Not Just One

Following the Sandy Hook Elementary School shooting, Brooke became an avid researcher on how to actually prevent violence and suicide. She began the website Save Thousands Not Just One and has become an active voice in support of evidence-based decision-making at the government level.

She testified in Hartford for three days straight following the tragedy at Sandy Hook and spoke at her first rally in Hartford on the importance of not only protecting the rights of law-abiding citizens but also addressing the root causes of gun violence in America.

In 2013, Brooke was introduced to A Girl & A Gun, a club of female shooters that organizes fun social events where women can get firearms training and make new friends.

The national organization has local chapters throughout the United States and A Great Start Shooting School is a host range of the CT Central chapter. You can join here.

[fluentform id="2"]
Get updates on upcoming classes & availability!
Tell us where to keep in touch